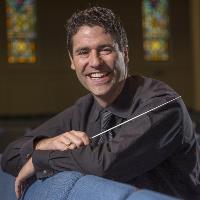 Dr. Matthew Arau, founder of Upbeat Global, is the Chair of the Music Education Department and Associate Director of Bands at the Lawrence University Conservatory of Music in Appleton, Wisconsin. In addition, Dr. Arau is on the faculty of the American Band College of Central Washington University and VanderCook College of Music. He also serves as a Conn-Selmer Education Clinician and as Member-at-Large on the NAfME Council for Band Education.

Dr. Arau has guest conducted and presented on student leadership, mindfulness, growth mindset, rehearsal techniques, and creating positive cultures in over 25 states and 4 continents. He has presented at the International Midwest Band and Orchestra Clinic, the Western International Band Clinic, the NAfME National Conference, numerous State and Regional Music Education Association Conferences, and the Conn-Selmer Institute. He has conducted honor bands in Australia, Greece, Cyprus, and Malaysia, and All-State honor bands across the United States. Dr. Arau teaches his Upbeat! Leadership Program to student leaders and Drum Majors at in-person and online camps around the United States and abroad. He is the co-organizer and creator of the Humanity in Music Education Conference scheduled for August 6-7, 2021 in Chicago.

Dr. Arau draws on a deep reservoir of fifteen years of experience as a successful middle school and high school band director in Loveland, Colorado, where he led his bands at Walt Clark Middle School and Loveland High School to numerous honor performances and championships and pioneered the Leadership Symposium. Dr. Arau holds a D.M.A. in Conducting and Literature from the University of Colorado Boulder and a Master of Science in Music Education from the American Band College of Southern Oregon University. He graduated magna cum laude from Lawrence University, where he earned a Bachelor of Music in Instrumental Music Education, Music Performance (Classical), Music Performance (Jazz Studies), and a Bachelor of Arts in Government. He resides in Neenah, Wisconsin with his wife Merilee, their dog Olive, and two sugar gliders - Little Foot and Flash. More information and resources from Dr. Matthew Arau can be found at www.upbeatglobal.com.