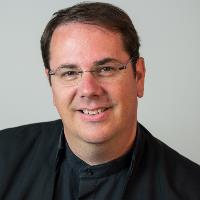 Dr. Christopher Chapman is the Director of Bands for the Central Michigan University School of Music, where he conducts the Symphonic Wind Ensemble and coordinates the wind band conducting area. His ensembles have gained notoriety and praise from composers and audiences alike and have been featured in performance sites from Carnegie Hall to concert halls in the United States as well as Japan, China and Taiwan. Recent commercial recording projects include: The Five Changes; Currents; Scenic Meditations; and David Maslanka's Mass was produced by Mark Records.
Originally from Columbus, Ohio, Chapman holds degrees in music from The Ohio State University, University of Nevada, Las Vegas, and the University of Washington. Dr. Chapman has appeared as a conductor, clinician and lecturer throughout the United States. He has also been a contributing author in A Composer's Insight: Thoughts, Analysis and Commentary on Contemporary Masterpieces for Wind Band, a series of books on contemporary wind band composers for Meredith Music Publications, a subsidiary of the Hal Leonard Corporation and Teaching Music through Performance by GIA Publications. Dr. Chapman's wind band compositions and arrangements, published by Timberline Publications, are receiving performances across the United States.
In 2015, Dr. Chapman was elected to the prestigious American Bandmasters Association. He has been the Northwest Division president the College Band Directors National Association and Northwest Divisional Chair of the National Band Association. An inductee into the Phi Beta Mu honorary Bandmasters Fraternity, he is also an honorary member of the Kappa Kappa Psi Honorary Band Fraternity where he has served as the Co-Governor of the Western District, and an honorary member of the Tau Beta Sigma honorary band sorority. Other organizations include the World Association of Symphonic Bands and Ensembles, Oregon Band Directors Association, National Association for Music Educators, and Oregon Music Educators Association. Dr. Chapman has also served as the Musical Director of the Oregon Brass Society, a British-style brass band in Springfield, Oregon, the Portland Wind Symphony, a semi-professional adult band in Portland, Oregon, and the Clock Tower Wind Orchestra, a professional concert band.